One of the best sitcoms on television
is a commercial 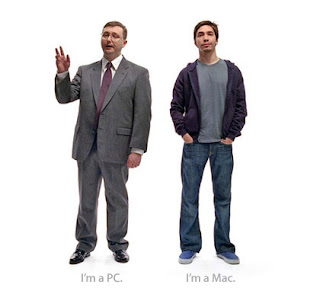 Two of my favorite shows on television, The Office and 30 Rock, feature a number of similarities:
Both shows are released in bunches (they'll run a number of new episodes, air some reruns, and then run some more new episodes) and supported by Webisodes or other unique online content featuring video.

All of these traits are currently shared by one other program, of sorts, currently on the air: Apple's "I'm a Mac, I'm a PC" commercials.

I'm not sure if that speaks to the high quality of the Apple ads or the low quality of the current sitcom crop. I think it's the former; though I have my two aforementioned favorites, I'm not willing to concede that literally every other sitcom on the air stinks. I do, however, think that this Apple campaign is a master stroke.

If I had to list my three favorite sitcoms, then, the list would go like this:
I implore the networks not to try to expand this campaign into a full-fledged 30-minute show. (Remember Cavemen? Try not to.) Maybe it's just time we expanded the definition of "programming" to include 30-second jabs of humor. After all, that's more than many shows can deliver over a full hour.
Email ThisBlogThis!Share to TwitterShare to FacebookShare to Pinterest
Labels: apple, mac, marketing, television
Newer Post Older Post Home