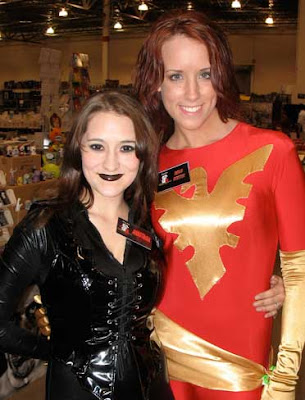 You're looking at something I used to mock. No, not girls. (Well, maybe in grade school.) Rather, girls -- and/or boys -- wearing superhero costumes at comic book conventions ("cons").

I've been attending cons off and on for the last 25 years. But only in the last 10 years or so have I seen this particular sartorial phenomenon.

And when I first saw it, I laughed. How silly, I thought, that anyone would take affection for a fictional character to such an extreme as to dress like him or her (or, in some instances, it). If I was with a brother or colleague, I'd deride them aloud (though quietly). Alone, I would silently chuckle.

But an odd thing happened since those first few years: I grew to enjoy the spectacle. Quite a bit, I might add.

Why? Because of my son. When I took him to his first big show, the costumed folks were one of the biggest attractions to him -- they were like tiny one- or two-person shows (the Storm Troopers especially like to wander in groups) at which he could marvel. This jolted me into seeing them with a fresh perspective. Suddenly, I no longer thought it was silly. In fact, I think there's some serious effort going on here.

It got so that I actually complained to one show's producer for relegating the costume contest to a back corner of the convention space without so much as a stage. Only people in the front row saw the costumes these folks busted their butts putting together.

Which leaves Friday. I snapped the above pic on Friday, and if I hadn't cropped it, you'd be able to see actual aisles behind these gals. Not throngs of folks pushing and shoving -- although no one is rude about it; imagine cattle milling about and you'll get the idea -- but actual aisles. And you can speak to the guests without waiting in long lines. It's actually very nice.

But, again, fewer costumes. It's funny how I went from hating them to appreciating them so much that I'm disappointed I won't be seeing too much of them in the future. But the peace that comes from the relative paucity of thronging masses is too much to pass up. From now on, I'm a Friday guy.

A note about the above photo: as you can see by the name tags, these gals were probably paid to dress up and sit at a booth. I'm just using this image to give you the general idea of what many, many people do for free.
Email ThisBlogThis!Share to TwitterShare to FacebookShare to Pinterest
Labels: comics
Newer Post Older Post Home