In a Reuters story carried prominently on MSNBC the other day, a headline screamed "Mac flaw could let hackers get scrambled data". Oh, no! What should we do? Are Macs finally as vulnerable as PCs? Is the age of Mac users' misguided security confidence done?

In this order: nothing, no, and no.

Buried -- literally buried in the story, in the ninth paragraph -- is this:

The technique — dubbed "Machiavelli" — exploits a vulnerability in the Mac OS X kernel, the heart of the machine's operating system. It only works on machines that have already been victimized, such as ones attacked with the pirated software.

So, your Mac is fine unless it's been previously hacked, though no explanation is offered as to how this would happen.

That's like proclaiming in a headline "Your car could catch on fire any minute!" -- creating the impression that your little VW could mysteriously explode as if part of a Jerry Bruckheimer film -- and then going on to explain, in the ninth paragraph, that this could only happen if someone doused it in gallons of gasoline and then tossed a lit match onto it.

I doubt NBC is anywhere near panic mode yet, but it must trouble them more than a little that, ratings-wise, Nightline is beating the new Tonight Show so frequently now.

I suspect this situation is only going to get worse: we just wrapped up one serious election cycle, but there's another one coming next year, and then the 2012 campaigns heat up. This means folks are going to turn more to news-oriented programming than entertainment-oriented programming. If Conan can't win now, he'll be hard-pressed to top Nightline down the road.

A lot of people -- a LOT of people -- tuned in to check out the new host his first week. So much so, in fact, that NBC proclaimed him the new "King of Late Night" in an episode of PR-fueled hyperbole that ended up backfiring on them a little (it takes more than a week to claim such a crown, after all).

It was only a matter of time before those numbers dropped, but they've dropped noticeably and regularly. This means that people have sampled the new host and aren't thrilled with what they've seen. Some of them may return, certainly, and it would be as premature to proclaim the Conan O'Brien experiment a failure as it was to proclaim him the new King of Late Night.

But does anyone else get the impression that Jay Leno's Tonight Show tenure might not be done quite yet?
Email ThisBlogThis!Share to TwitterShare to FacebookShare to Pinterest
Labels: conan o'brien, late night, television

I've never read the Twilight books -- has any literary effort so successful been so maligned since The Bridges of Madison County? -- but adding Bryce Dallas Howard to any cast can only be a good move.

I mean, geez, just look at her. 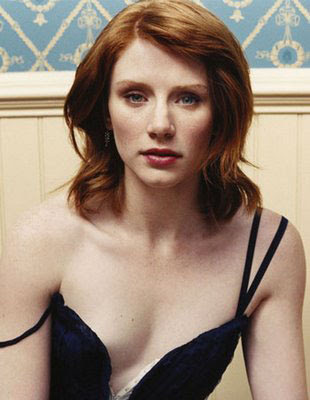 My zero percent interest in these films has just increased to about, oh, two percent interest.
Email ThisBlogThis!Share to TwitterShare to FacebookShare to Pinterest
Labels: beautiful women, movies, twilight

Like most Americans, I'd never heard of Simon Pegg, Nick Frost or Edgar Wright prior to seeing Shaun of the Dead. After falling in love with that film -- which apes its horror film roots as lovingly as Young Frankenstein does its -- I was fortunate enough to catch a few episodes of their first collaboration, Spaced, on BBC America.

That small Spaced exposure was enough to spur me to YouTube, where each episode had been lovingly posted by other fans but butchered to fit around that site's file size limit. (One episode, for example, could be separated into as many as four parts.)

Now, the TV show about the budding comic book artist and his frustrated writer roommate is available on Hulu.com.

You owe it to yourself to check this show out. Brits being Brits, only 14 episodes were made over two seasons -- far less than the 44 episodes two seasons of an American sitcom usually generate -- but the trade-off is that each one is pretty darn good. All 14 episodes are online now at Hulu and I can recommend all of them, though the show really hit its stride in the second season.

No idea how long they'll be there, so don't delay.

Too lazy to click over? I'll save you some effort:

Remember this post? Well, that very same apartment complex wasn't content to hang just one giant misspelled banner, so they added another.

By the way, I'm glad "your" here at my blog.
Email ThisBlogThis!Share to TwitterShare to FacebookShare to Pinterest
Labels: humor, marketing
Newer Posts Older Posts Home
Subscribe to: Posts (Atom)