Can "The Walking Dead" cling to life years from now? 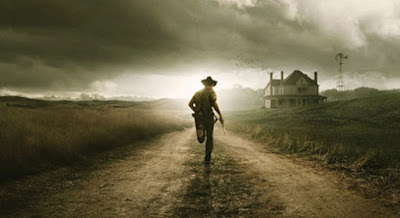 It's been years since I watched an hour-long drama for any length of time. I find the format to be a real challenge for a couple of reasons.

First, it's an hour. I can usually convince myself that I have 30 minutes for, say, Modern Family or Community, but an entire hour? That's frequently just too much to ask of me, especially when I have other pressing matters such as not doing yard work or losing at Words with Friends.

How about writing 22 of them? And then doing that again after a short break?

My biggest problem with hour-long dramas has nothing to do with the writers and everything to do with the format. If a traditional television season is 22 episodes and each one-hour episode is about 45 script pages (I'm following the "15 minutes of commercials for each televised hour" principle here), one season of a show requires nearly 1,000 script pages. That would be a lot for William Shakespeare, let alone mere mortals.

As a consequence of churning out so many pages, all focused on the same characters (for the most part), these shows inevitably descend into dramatic caricatures of their earlier selves, with dramatic elements seemingly tossed in willy-nilly to generate enough tension to drive us through the current episode and prep us for the next. As a result, the line between prime-time drama and day-time soap opera can oftentimes be blurred.

The Sopranos faltered toward the end of its run, I believe, because the storytelling value of its characters' lives had been exhausted (even though I don't believe any season of that show featured 22 episodes). The X-Files similarly wore down (on a more traditional network schedule), as did ER, The West Wing, Hill Street Blues ... well, the list goes on. I think it's happened to just about every hour-long drama that's lasted more than three seasons.

(I think police/crime/mystery procedurals are largely exempt from this, as they don't rely on serial storytelling. If Monk was still on the air, I'd still be watching it. Every freakin' week.)

Right now, The Walking Dead is the only hour-long program I watch. And I'm absolutely hooked. I'm hoping we are many, many seasons away from the storytelling fatigue other programs encounter, because this is a non-traditional schedule -- season one was, I believe, six episodes and the just-completed season two was 13 episodes. That's two seasons with a lighter episode load than a network drama would be required to produce in a single season.

Despite the loss of season one showrunner Frank Darabont -- a loss that had some writing off the show -- this second season ratcheted up the human drama without overreaching while providing genre fans some great frights.* Now if Lori could only keep on eye on Carl every now and again, we'd all be good.

I don't know ... maybe I should be lamenting. Nineteen hour-long episodes of any television program represents 19 hours of my life I could have spent napping or trying to start my old lawnmower. Still, I'm keeping my fingers crossed that The Walking Dead continues to bring life to my television viewing time for many years to come. 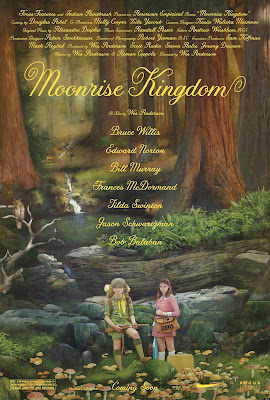 I am going to see this movie. Don't try to stop me; I will chew through your arms.
Email ThisBlogThis!Share to TwitterShare to FacebookShare to Pinterest
Labels: movies, posters, wes anderson 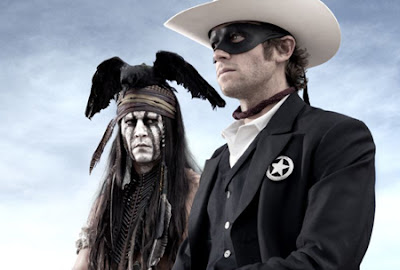 Despite my uncertainty as to whether or not the world needs a new Lone Ranger movie (remember this one?), Johnny Depp is single-handedly enough to make me give a shit. So he can go right on being as "crow head" as he wants to be; I'm in. (Thanks, WWTDD.)

BTW: Ed Wood remains one of my all-time favorite movies. This is almost completely unrelated to this post, but I just wanted to mention it.
Email ThisBlogThis!Share to TwitterShare to FacebookShare to Pinterest
Labels: armie hammer, ed wood, johnny depp, lone ranger, movies, wearing crow

The nominees for Best Animated Short Film for 2011 were:

If you have OnDemand, you can watch most of these right now for about seven or eight bucks, plus some other animated shorts that received special commendation (or something of the sort). Well, you can watch them all except for La Luna, a Pixar short that will be available widely once the new film Brave is released.

La Luna or no, I'd recommend checking them out. The "special commendation" ones that close the show aren't that great, but I doubt you'll come away dissatisfied with the overall experience.

My favorite? Dimanche/Sunday, a charming slice-of-life about a young boy, his family, some train tracks that run through his town, and a bear who ... well, I won't spoil that for you.

When it comes to animation, I tend to be more of the retro sort, and the style for Dimanche/Sunday (check out the images above this post) fits the bill perfectly.

Not that you'll have a bad time with Fantastic -- you may even, gasp, prefer it -- but check them all out while there's still time. Me? I'm heading over to iTunes where I can pick up Dimanche/Sunday for about three bucks (HD; the SD version is, naturally, cheaper) and always have it at the ready when I need to see a gigantic train barrel through a small town.
Email ThisBlogThis!Share to TwitterShare to FacebookShare to Pinterest
Labels: academy awards, animation, art, movies

For the last two days, an old Billy Joel tune has been bouncing around my head -- "Streetlife Serenader." But here's the thing: I inadvertently replaced the words "streetlife serenader" with "midnight masquerader." I even sorta imagined the album featuring that title. Now, the phrase "midnight masquerader" is indeed in this song ... but in my head I replaced all the "streetlife serenaders" with it.

I've heard the song, literally, a few hundred times. How does something like this happen?
Email ThisBlogThis!Share to TwitterShare to FacebookShare to Pinterest
Labels: billy joel, lyrics, memoir, music

Three episodes in, AMC's Comic Book Men is starting to come into better focus for me:
I may be done with this one, despite the fact that -- true to my suspicions -- this episode was an improvement upon the second one, which itself was an improvement upon the first. There's no way this gets a second season, right? Despite what must be absolutely paltry production costs, AMC must have something else in the hopper for post-Walking Dead, right?

Listen to the band

I always knew The Monkees.

The furthest reaches of my memory already included them, as if I was born humming "Last Train to Clarksville." Blame daily UHF channel reruns; blame Boyce & Hart. At school, we used to run around pretending to be The Monkees* and at home I would play The Monkees Greatest Hits as often as possible.

As I got older, liking The Monkees became increasingly less cool: they were fakes** who paled in comparison to The Beatles and never produced anything as musically substantial as, say, Pink Floyd's The Wall or The Who's Quadrophenia. Never mind that they did actually have musical talent. Never mind that everyone pales in comparison to The Beatles, including the individual members of that group post-breakup. Yeah, they don't have a Wall on their discography, but two out of three ain't bad and their greatest hits collection on iTunes -- The Best of The Monkees -- is remarkably deep.

It's likelier that history isn't as kind to The Monkees as it could be because their music was, for the most part, fun. Not soul searing (Dylan, King, Springsteen), not gut wrenching (Tommy, "Sunday Bloody Sunday") not ear-popping (Black Sabbath, AC/DC). Fun. And "fun" often has an expiration date in the shelf life of the, ahem, discriminating music lover.

But I'm OK with fun; I think there's room for it in everyone's life. As a result, I've always had room for The Monkees in select playlists.

So it was with great dismay that I learned of singer Davy Jones' death from a heart attack. From what I've heard, he'd been living a pretty clean life and had recently received a clean bill of health. Sometimes, though, you just can't do enough.

Vocally, The Monkees belonged to Mickey Dolenz, but "Daydream Believer" is just perfectly delivered by Jones. He also does terrific work on "Look Out (Here Comes Tomorrow)." And you never saw Marcia Brady swoon for Dolenz so that evens the gentlemen out a bit.

Make yourself some time today to pick up a song or two from iTunes or Amazon and give a listen. It's okay. You'll sacrifice neither your "hard rock god" status nor your indie cred. Sometimes, it's okay for music to simply be fun.


* I remember one friend becoming upset because he had to play the guy who always wore the hat. I explained that, no, he was playing Peter Tork, I was the guy with the hat, Michael Nesmith. This reassured him immensely.

** Pre-Internet, sometimes you just had to take other kids' words for it, especially if they were older. And the shot against The Monkees from the local teenage boy Greek chorus was always that they couldn't actually perform any instruments and were hardcore imposters. Not true.
Email ThisBlogThis!Share to TwitterShare to FacebookShare to Pinterest
Labels: Davy Jones, music, television, The Monkees
Newer Posts Older Posts Home
Subscribe to: Posts (Atom)