Can "Comic Book Men" save itself? 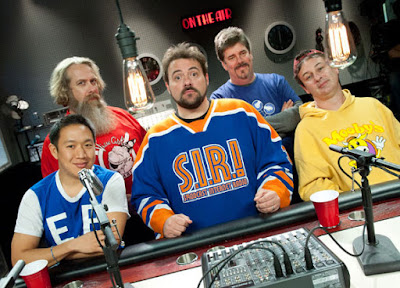 That's less "damning with faint praise" than you might think. Sometimes it takes a show a little while to get going, and every bit of patience can help. If episode #3 is as improved over #2 as #2 was over #1, we might be headed somewhere.

But I have my doubts. There were just enough recurring problems evident in #2 that I'm afraid we're watching the only season of Men (which at least makes the "Complete Series" DVD affordable).

And those problems are:

Bryan Johnson's desperate pleas for attention
First episode impression: "What an a-hole!" Post-first episode impression, formed after reading his reply to an unfavorable review on ComicsAlliance.com: "Yep, still pretty much an a-hole." But in the second episode we see just a hint of some humanizing self-deprecating humor as the aging, heavyset man comes face-to-face with his mortal limits during the travesty of a street hockey game that formed the centerpiece of the episode. This guy needs to stop trying so hard to be "Mr. Witty Curmudgeon" and recognize that he's far closer to being "Passenger #4 on Kevin Smith's Coattails" and simply appreciate the ride.

Ming Chen's vagina
Seriously, dude. Grow a pair. I know, I know: producers behind this Pawn Stars ripoff feel that it needs a Chumlee. It doesn't. In the second episode much was made of how Chen paid for guest-star Jason Mewes' merchandise, as if Chen was so taken with Mewes' D-list celebrity that he would do anything for the Big Star. What a laff riot! But wait: am I the only one who heard Chen's boss order him to pay for the items? Guys, we all know 90 percent of this show is staged, but can you at least provide script supervision off camera? Chen seems perfectly likable, but I suspect America's tolerance for watching a bunch of white guys picking on a wimpy Asian dude is lower than some reality show producers might think.

Sixty -- count 'em -- sixty minutes of this
Why in God's name is this show 60 minutes long? There may very well be an entertaining 22 minutes in each episode; wouldn't it be better to strive for "good" rather than "it fills the time slot"?

Kevin Smith
Smith is a natural raconteur. An absolute natural. The problem is, he's so head-and-shoulders above everyone else onscreen that a noticeable pallor settles over the show when he's away ... unless a Batmobile is involved. How long would he have to stay in Jersey to film a full season of 22-minute episodes? They could shoot them like they do game shows: five or six in a day (okay, that might be an exaggeration, but I'm just sayin').

Antiques No-Show
I think there might be a real problem with the premise of Men: shows like Pawn Stars and Antiques Roadshow work because there are so many potential stories about the various items being discussed. They're not limited to any specialized fields, so that in any one episode you can hear something about a Civil War flag, vintage 1920s art print, or antique chair (believe me, that all seems mighty compelling under the right circumstances). But Men's relatively limited focus on comic books, films and toys may end up hampering it; hence, my "more Kevin Smith" suggestion and the complaints about how some of these folks are being portrayed. The stuff walking through the door won't save this show: the people will.

As for now, Comic Book Men will remain on my radar, but consistent improvements -- even if they're more gradual than grand -- are definitely needed to help keep it there.
Email ThisBlogThis!Share to TwitterShare to FacebookShare to Pinterest
Labels: AMC, Comic Book Men, comics, Kevin Smith, television
Newer Posts Older Posts Home
Subscribe to: Posts (Atom)