Read this: "Darth Vader and Son" 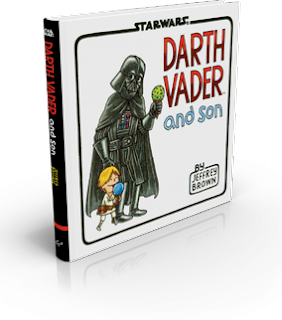 I recently had the opportunity to read the pseudo (?) children's book Darth Vader and Son, from Chronicle Books. I have the question mark after the "pseudo" there because this is the type of book that should appeal to folks of just about any age. Yes, a passing familiarity with Star Wars is kinda required, but who the hell doesn't have a passing familiarity with Star Wars? It's been freaking everywhere over the last few decades (to the tune of about $22 billion).

But I digress. Darth Vader and Son was written and illustrated by Jeffrey Brown, one of my favorite comics creators working today. You'll read this one quickly for a $14.95 book (although that's MSRP, which no one pays anymore), but return to it time and again.

Cute, right? Brown incorporates all sorts of Vader one-liners -- removed completely from their original context -- into some pretty hilarious situations.

If you want more Jeffrey Brown, check out his website. I'll warn you, though: he does some pretty grown-up work, too, so don't order Be a Man expecting more cuteness. It's frankly pretty dirty.
Email ThisBlogThis!Share to TwitterShare to FacebookShare to Pinterest
Labels: books, comics, humor, jeffrey brown, star wars
Newer Post Older Post Home