Domino's Pizza to customers: We suck 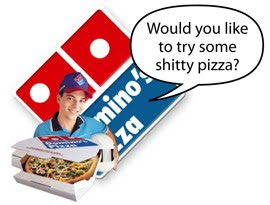 Domino's Pizza's new ad campaign is a puzzler. If you haven't seen it yet, it goes like this:
This is supposed to come off as repentant: listen, we screwed up, but we're here to make it up to you. It's the boyfriend acknowledging he hasn't been the most faithful guy in the world, but he's gonna change! Oh, yes, he will!

Here's what the campaign actually says: Domino's Pizza has knowingly been serving lousy pizza to its customers for years.* But now that we live in a world where a Google search for "Domino's Pizza sucks" returns more than 30,000 hits** -- in other words, a world with accountability -- Domino's wants to make good.


So, wait: all those other times Domino's boasted about their pizza ... they were lying?

Apparently so. But don't worry: we can trust them now. Right?

Boxing promoter Bob Arum once destroyed his credibility when he quipped to reporters, "Yesterday, I was lying. Today, I'm telling the truth." Yesterday (figuratively speaking), Domino's Pizza said they served great food, and today they're acknowledging that that wasn't the case at all. So let's hurry up and believe them now.

Which ad house dreamed this one up? "Listen, let's defecate on whatever good standing the company has left with its current and prospective future customer base and just come out and say we suck!"

The goal, I assume, is to raze what good reputation the company has left in order to build a sparkling new one. But companies that have been around for nearly 50 years can't do that overnight. Here, they're simply trying to do too much:
It's laziness, pure and simple. You're not going to change everyone's minds immediately. What about:
It'd take longer to roll out something like this, but the reward would be a campaign that resonates more positively with kids, college students, and rushed parents looking to get a decent meal on the table.

Kodak*** tried a variation on the "we suck" strategy. They released a video allegedly designed solely for internal viewing -- because you're going to sink that much money into an internal corporate video, right? -- that made fun of the company's business practices, innovation laziness and Advantix. Same result, though: it ends up making the company look bad, plain and simple.

So, now it's Domino's turn. They were lying to us yesterday, but today they're telling the truth. Let's all rush out and give them our money, shall we?

* Assuming, generously, that this "our pizza sucks" revelation just occurred to the powers that be within the last two or three years. It can take at least that long to create new recipes and develop an ad campaign. But I'm willing to bet they've known for far longer where their pizza ranked with consumers. Ten years, perhaps?

** One Web writer posted about Domino's: "This is my drunk food right now (a free pizza given to me by a friend) I guess I can't complain, but I'll just bitch about how much it sucks." We have both free and drunk in there, and the guy is still motivated to go online to complain. That's some bad pizza.

*** I wanted to work Joe Isuzu in here, too, but think I've said enough. Still, having a slimy liar as your company spokesman is a ridiculously foul idea, too.
Email ThisBlogThis!Share to TwitterShare to FacebookShare to Pinterest
Labels: advertising criticism, marketing
Newer Post Older Post Home