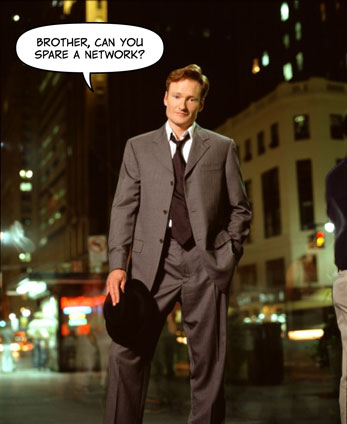 Okay, it looks like Conan's gone. Back in this post, I suggested NBC simply part ways with the new host, put Leno back on The Tonight Show, and keep Jimmy Fallon. To be fair, I also said I didn't think that would happen: Conan's options are limited enough -- and The Tonight Show valuable enough -- that I thought he'd stick around. But I started to waver on that prediction when it became clear that, through all of this, there was no way NBC would re-up him after his contract was up ... and his contract is up in the relatively near future.

It looks like, after mucking up late night worse than they did when they gave Leno Tonight over Letterman, NBC gets a do-over here. And we get to see how Conan does at Fox.

Listen, odds are Conan lands at Fox because it could work out for them, but it will feel an awful lot like two people coming together because they couldn't make any other relationship work. Yeah, that'll energize audiences!

Other folks have suggested HBO, but HBO isn't going to give him anywhere near the money one of the Big Four could. And syndication won't work for him after this debacle, it just won't.