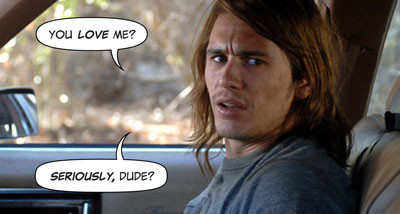 Seriously. More often than not -- well, okay ... the vast majority of the time -- actors doing anything other than acting bothers me. See: "But what I really want to do is direct!" and/or "Check out my new clothing line!" They have every right in the world to do this stuff, but it still bothers me. Irrational, I know, but there it is.

James Franco is a different story. Franco is everywhere ... in an almost literal sense. If the guy started performing a song and dance routine at the restaurant down the street from me, I'd only be mildly surprised.

But does it bother me that the guy is acting, hosting, writing, directing, etc.? Not one bit.

There are a couple problems when celebrities branch out:


For me, Franco is avoiding all of these pitfalls.

Plus, there's Pineapple Express. Come on: how can you not love that guy?

I'm looking forward to his Oscar gig with Anne Hathaway. (A brilliant move on the part of the producers, by the way.) More James Franco is all right with me.