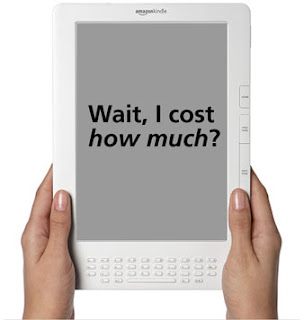 I should own a Kindle. I should be all over a device that takes the various stacks of books I have planted around the house and condenses them into a handy little gadget. I should marvel at the ease with which I can access a library of some of my favorite writers and some of the greatest works of literature the world has ever known. I should stare in awe as the first chapter of that title I've been meaning to try downloads wirelessly to the Kindle.

I don't own a Kindle and don't have any plans to buy one. The root of the problem? Cost.

Hey, that's the root of just about every problem with a purchasing decision, right? But the Kindle is so expensive that I -- and you're less likely to find a more rabid book lover, seriously -- cannot even dream of affording it right now.

I used to blanch at the $10 per book cost. After all, without spending money actually printing or shipping the thing, how much can it really cost? And that's currently $10 more than I spend on 99 percent of my books, thanks to a local library system that is so good it's almost scary. Oh, and I can't loan a title to a friend or family member, making that $10 seem just a little wasteful. And not just wasteful for me, either: wasteful for the writer, too. After all, no writer would object to me generating greater exposure for him or her.

But I got over that. I recently spent an entire day sorting through boxes of books and decided on the spot that spending $10 per title to spare me the expense of warehousing hundreds of books probably isn't a bad investment. And sometimes the library books have mysterious stains on them , which always freaks me out. (Why aren't people more careful with these things?)

But the device itself is monstrously expensive. Sure, they just lowered the price of their smaller version to $299 (still easily $100 too much), but the Kindle DX -- AKA "the one with the realistic screen size" -- is $500 (I'm rounding up $11: sue me) PLUS $50 for a leather book cover (a good idea to protect the thing, right?) AND another $100 for a two-year extended warranty, which I've read is a really good idea for these things. And suddenly the Kindle is a $650 proposition for me, a guy who currently spends $0 on books.

Tech kingpin Leo Laporte mentioned on a podcast some time back that the Kindle is so expensive because Jeff Bezos decided he wanted to sell it for what it cost and not subsidize it in any way. That's all well and good until you realize that Amazon took years of losses on their sales and real estate deals in order to lay the foundation for an eventually successful company. It was a safe bet predicated on the fact that the Internet was going to change the way we shop forever. They didn't charge me what it really cost them to send me a book: they lost money for a time until they could make it up in volume. Even now, they'll send me a book for free. That doesn't mean it doesn't cost anything to ship me that book; it means they're underwriting the expense in exchange for my continued business.

So why not do the same with the Kindle? Is Amazon hedging its bet a little? Maybe they don't want to go too far out on a limb with this thing. Maybe they fear it'll become their Apple TV: fine for the "hobbyist" but not for us regular folk.

That's a mistake: a small Kindle at $99 and a Kindle DX at $199 would sell, and sell well (Jobs is right to point out that Amazon doesn't boast sales figures for the devices because there's nothing to boast about). Well enough, I suspect, to allow Amazon to make up the difference in book sales.

Here's why: e-readers will change the reading game the same way online retailers like Amazon changed the shopping game. Not "might" change it; "will" change it. But with a $650 e-reader, Amazon has priced itself right out of the conversation, and Apple is getting ready to shut them up for good. When Apple's new tablet device comes around, Amazon's premium-priced single-purpose device will look like a joke compared to something that also does music, video and Web for a hundred dollars more.

Oh, and don't tell me reading on a back-lit tablet will be uncomfortable. Yes, it will be. And no one will care.

It's not too late: ask Sony how they feel now that the PS3 is priced to sell. Don't bother, I'll tell you: they're happy. Because they're selling them now, not sitting back staring at piles of them collecting dust in warehouses while Nintendo eats their lunch.